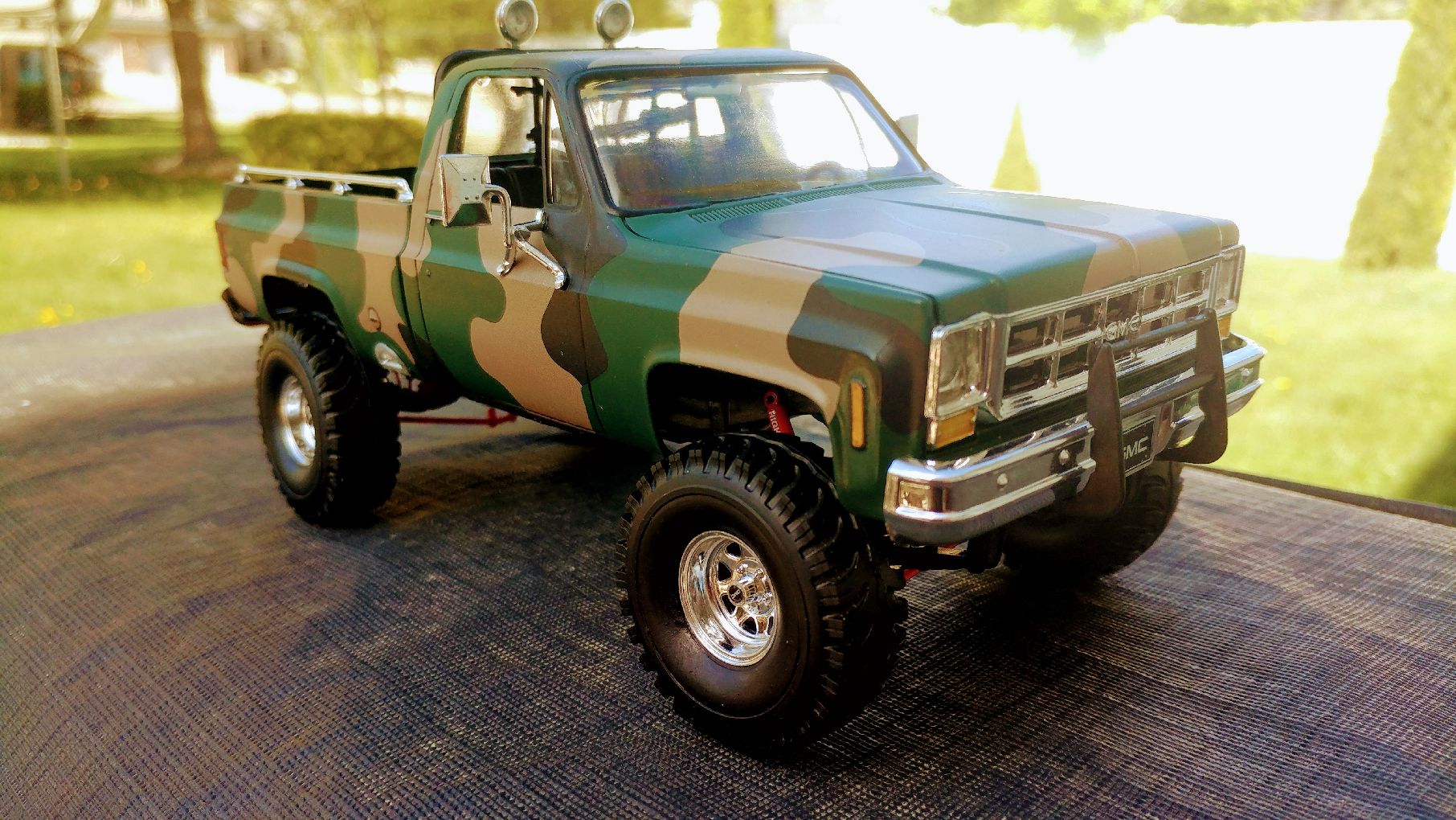 4x4s are gaining popularity in the modeling world, and Revell has jumped on the bandwagon with a proliferation of reissues, one of which is the subject of this review − the ’78 GMC “Big Game Country.” This kit was first tooled in 1978, and reissued in 1981 as the “High Roller.” It was subsequently reissued in 2012 with the addition of a snow plow, and this year as the “Big Game Country” pickup. There are 105 parts, large soft vinyl tires, and a comprehensive decal sheet with gauges, camouflage, gas can and shock absorber markings, wheel hub logos, white animal silhouettes, and a windshield decal. Nobody badges.

As expected with age, there’s a bit of flash, heavy mold lines, and pin marks. The cab is a three-piece affair I glued the rear cab panel in place before painting. There are fairly prominent mold lines on the cab that need attention. There are ejector-pin marks on the radiator wall, the hood’s underside, and the bed’s underside that need to be dealt with for realism. The marker lights are molded in place, so you can paint them or use the supplied decals.

The bed features a movable tailgate, and after the assembly, I found gaps in the rear between the bed and the tailgate. I’m not sure if it was my fault or typical of this kit. The cab does not have a floor pan, and there are large holes in the firewall for the hood hinges. The truck’s engine is a nice GM small-block, and typical of the 1970s and ’80s Monogram kits is fairly simplified. The oil pan is molded to the block halves leaving a seam to sand. The starter, fuel pump, and oil filter are molded on while the distributor is molded to the intake. When building the transfer case remove the alignment pin near the round end.

Moving on, its frame is nicely molded, with some flash, but not too bad. It has molded-in fuel tanks with ejector-pin marks that need removal. The exhaust also is molded into place and has ejector-pin marks near the tips. The tips need to be drilled, and I feel are a bit under-scale. Front and rear suspensions are basic, having axles, drive shafts, and springs molded together. The differentials are molded open, and realism should be filled. Eight shock absorbers all have fairly deep ejector-pin marks that need filling. They do not completely reach the springs.

Sadly the wheels fit poorly with the tires and you’ll need to enlarge the axle retainer holes for the pins on the axles. Despite a nice dash, the interior is the weakest part of the kit. There is a nice steering column featuring both shift and turn signal levers, a chrome steering wheel, a CB radio sans mic, and a 4WD selector. The seat is molded in place and there’s little door detail. Note the gun rack for the rear window.

I did have minor issues with the camo decals conforming in a couple of places, but more time with setting solutions would help. Although simplified the kit builds into a nice shelf model of a well-lifted 4×4.

Due to the short reach of shocks, the bad fit of tires, and other assembly issues I mentioned I wouldn’t recommend this kit to a new or young modeler. It takes a bit of work to make this one contest worthy. -Lee Riley