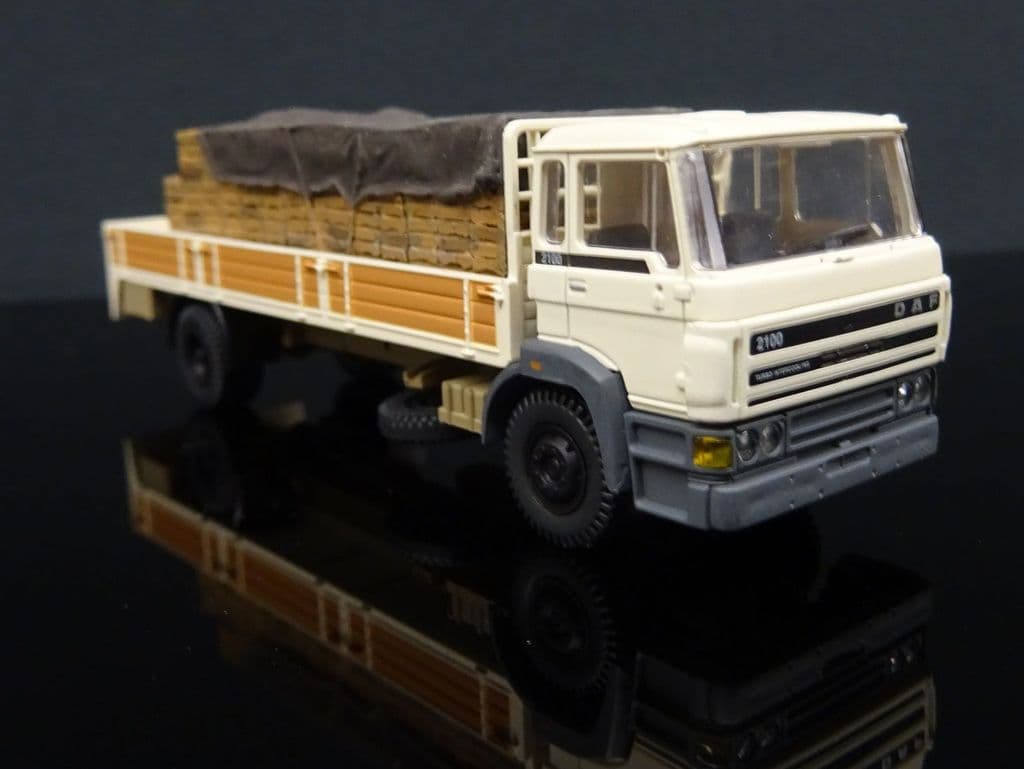 1980 to 1989 saw the production of Scania’s Two-Series truck line and Italeri captured the hard-working 142M flatbeds with trailer quite well.

Included in the box are more than 20 real rubber tires, and a plethora of bags containing parts individually separated by color.

The decal sheet consists of European license plates, gauges, body markings, and stripes. Decals are thick and don’t conform to any abnormal shape even with a judicial amount of setting solution. A lower body stripe on the sheet can’t be used to match the truck on the box cover as it doesn’t reach all the way around the body to the grille. I also didn’t use the trailer markings.

I found little flash or visible mold lines on the chassis parts. The only flaw was the ejector pin marks on the outside of the frame rails. This was easily rectified. All chassis parts went together well.

The key part of this build is the almost perfect representation of the 350-horsepower, 14.2-liter turbo-diesel V8. This 30-piece behemoth features a split block and transmission that requires filling of the subsequent seam.

After completion, detailing, and adding a paint similar to the Scania light blue/green, the engine fit snuggly in the chassis.

Next came the exhaust system, air intake, and rubber tires with authentic tread patterns and sidewall markings mounted on the chassis’ gray wheels.

Its cab is a multipiece body that builds around the interior. Paint all the body panels before assembling the interior, taking extra care not to damage the finish along the exposed seams.

The interior was painted a light gray and black with seats and rear sleeping bunks a medium gray tweed type finish. Its dash was detailed with gauges, a heater, and a radio. Overall the interior builds into a convincing, but otherwise no-frills, driving space.

The body envelopes the interior with a rear bulkhead, front fascia two side walls, and a roof panel that is fitted in a sequence that should be followed closely to help align each panel with the others.

The glass fits snugly with minimal adhesive and no signs of distortion.

Even then the main body parts are molded in yellow, I sprayed them with Tamiya yellow (TS-16) and used a two-part clear to seal in the decals.

Unlike the chassis and engine, the cab was a challenge to complete. Any paint buildup will have you scrambling to align the body panels that fit just fine before paint.

After assembling the body, I attached the cab to the chassis.

One problem: the cab mounts are located directly behind the front bumper making it nearly impossible to mount the cab without turning the chassis upside down while holding the cab in the other hand and trying to align the pins that hold the cab to the chassis.

If you don’t add the bumper until after the cab is mounted, you’ll have clear access to the cab mounts and will be able to see them clearly.

The buildup of the nine-piece flatbed was fairly straightforward. I chose to paint this a lighter gray.

After the bed was completed it was laid in place and held down with 5-minute epoxy, giving me time to check it was aligned correctly with the chassis. The spare tire also was mounted as the final assembly item to the main truck.

The last three steps are reserved for the buildup of the 43-piece flatbed trailer, which was painted dark gray per the factory specifications. Its chassis has a unique four-part articulation point that is assembled well and works smoothly to give long rig maneuverability for display purposes.

The final assembly had the bed affixed to the trailer chassis, the license plate decal and long vehicle markings, tail lamps, and rear mudguards. My only issue with the trailer was that the spare tire mount under it was shorted material in the injection process, requiring me to add a piece of material to the mount and blend it in.

The 142M kit was a blast to build, the only drawback being its size and rather fragile nature. Would I build another? Absolutely! With additional added detail and dry washes, this combo could show off what these trucks were really meant to do.