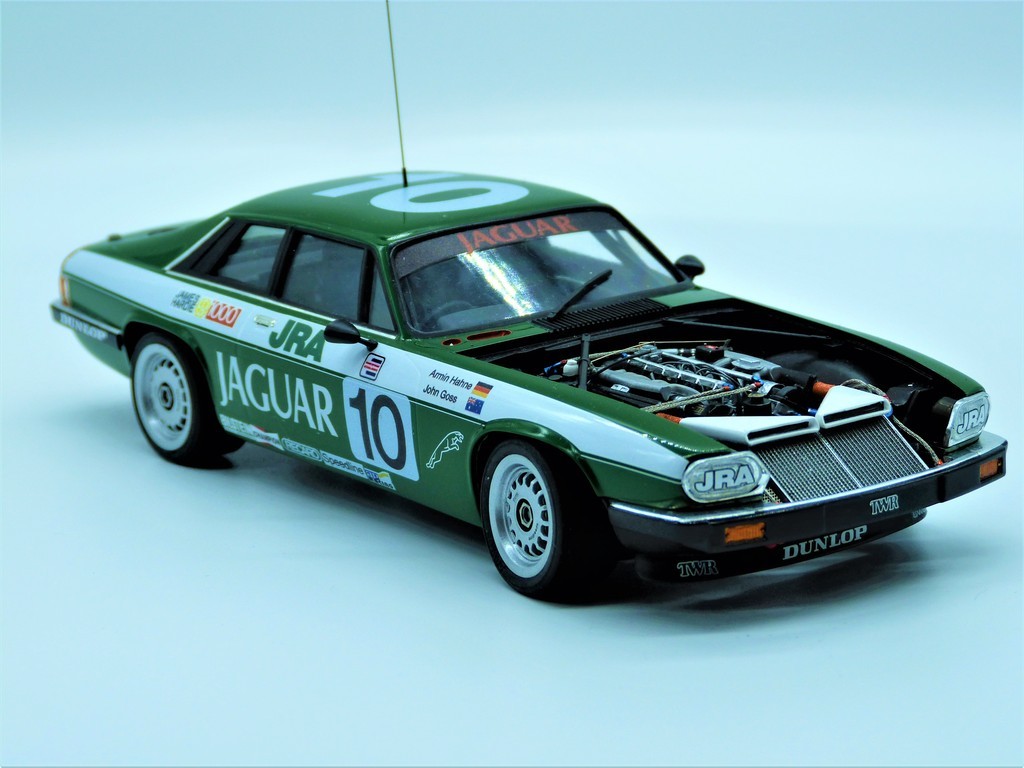 Hasegawa’s Jaguar XJ-S V12 is the latest offering of a kit first released in 1983. It features a full engine, complete suspension, and a detailed interior.

There are 121 parts and you will use them all.

Accessories driven by the serpentine belt have open ends that require filling, and a washer reservoir and brake booster are supplied to mount to the inner fenders.

Sadly, the firewall lacks detail, and the radiator/core support assembly is separate.

The Jag’s chassis base plate has the transmission and driveshaft molded in but both suspensions are multipiece units, with the front consisting of eight pieces. It can be made possible by not gluing the upper control arms (part No. E26) to the spindles ( parts E6 and E7).

Twelve parts build up the rear suspension. Assembly is a little fiddly, so patience is needed. The separate dual exhausts are nicely detailed.

Two holes in the chassis floor pan are used to locate the interior floor and are visible unless filled or covered.

Tires and wheels on the XJ-S are excellent, with the vinyl tires molded with Pirelli P5 lettering on their sidewalls. The wheels are molded in a satin silver suitable to use as is, after highlighting the inner spokes and lug nuts.

Wheels attach to the axles using vinyl grommets, which need to be test-fit early. The axles need to be thinned to ease the final push-fit.

The interior is built up from the floor, and there’s impressive detail on the dash, console, and door panels when picked out with paint. A gauge decal and clear lens are provided for the cluster. Note: this model can only be built with a right-hand drive.

The windshield with side glass is molded as one unit, and side windows have flow lines on both sides in front of the B-pillar. The rear glass is separate; a raised area representing the trim molding makes foiling easy.

The one-piece body has separate bumpers and hood, and, disappointingly, I found serious sink marks on the deck lid and doors. There was also an “outie” in the middle of the roof, surprising for a Hasegawa kit. Hopefully, only my kit arrived like this.

The bumpers don’t have strong attachment points, so plastic runners were added to the insides of the fenders and quarter panels to provide more contact area for glue.

Finishing the bumpers proved challenging. The XJ-S has a chrome plate on both bumpers with matte black impact bars. The rear also has two body-colored areas, both come as a one-piece maroon part. The chrome portion was done with Bare-Metal foil. The XJ-S isn’t overloaded with chrome, but foiling the rear was daunting.

The hood needed the sides sanded to fit the body. Headlight and taillight lenses come clear, requiring the taillights be painted. There are wipers for both the windshield and headlights.

When installing the chassis to the body, insert the front first. Sand down about 1/3 of the tab at the rear of the chassis.

Decals are well done with a choice of silver or gold pinstripes and European licenses are included.

This is a great kit, but it needs to be approached by an experienced builder.