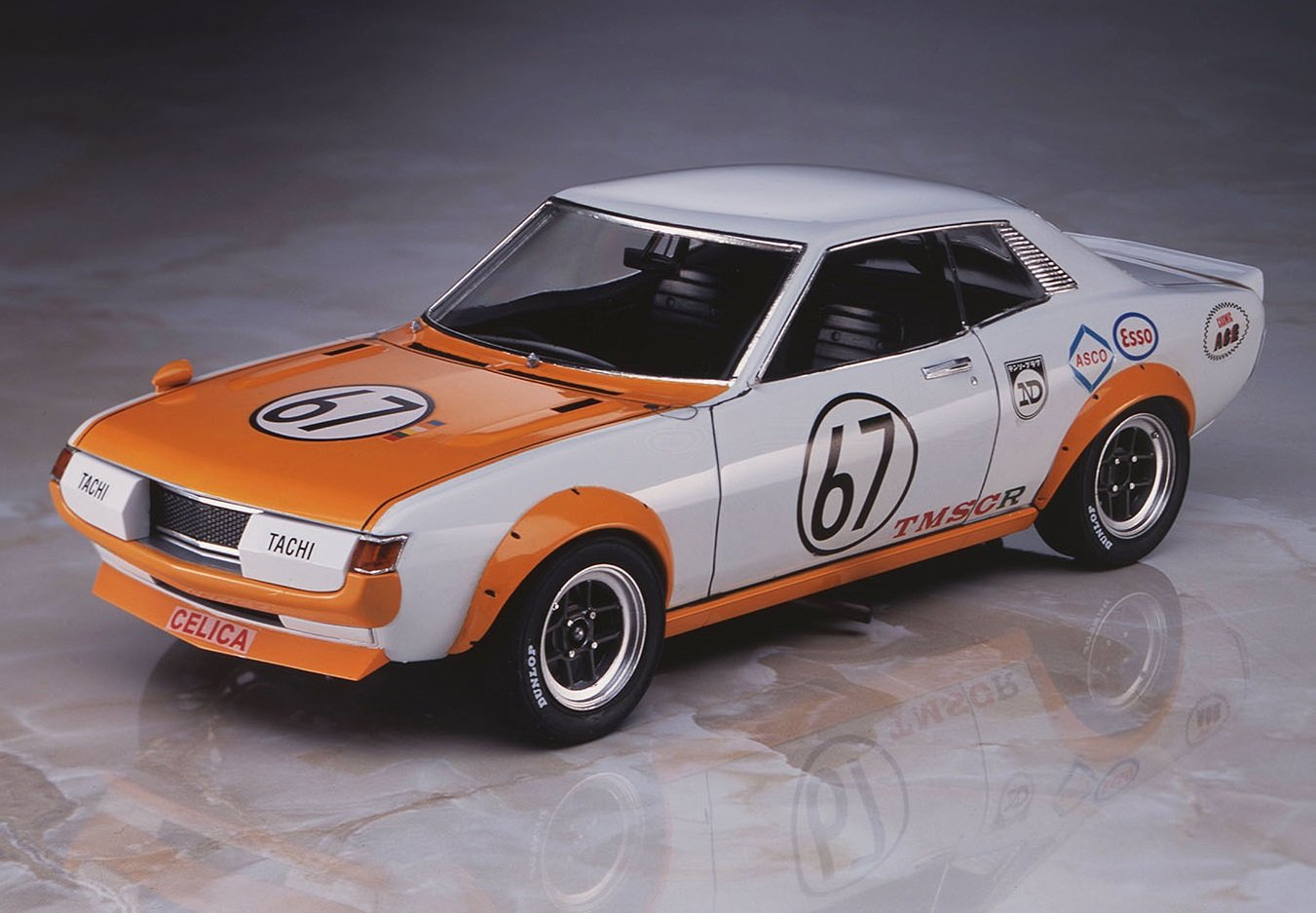 Hasegawa’s kit of an iconic Japanese sports coupe, the 1972 Toyota Celica 1600G, was first released in 2002 with a red car appearing on the box. It was reissued a year later with the 1972 Nippon Grand Prix livery seen on the finished model here.

Then, in 2014, Hasegawa popped the Celica 1600GT once again in two different boxes, this time with parts to make a stock version. Opening this particular box for the version that buzzed around in the 1972 Japan Grand Prix Touring Car championships, some of those parts are included. But there aren’t enough to replicate a factory stock car.

Inside there are 94 pieces molded in white, clear, and soft rubber. Since there weren’t any chrome parts, I used a Molotow Liquid Chrome pen on a handful of parts that needed plating.

From past experience, and in this kit, I find Hasegawa’s plastic disappointingly brittle compared to U.S. manufacturers.

Since Toyota raced a few Celica 1600GTs in the 1972 Nippon Grand Prix, you’re given the option to paint the first- (driven by Nobuhide Tachi) and second-place cars’ unique schemes: white and orange for the first, white and gray for a second. I chose to mirror the No. 68 car driven to second place by Kenichi Takeshita.

Out of the box, there are moderate mold lines on the body. But otherwise, it’s well done and certainly looks like a Toyota Celica.

The body has badging that will need to be removed for the first-place car. Thankfully, instructions give a clear indication of which ones need removal on either variant.

Don’t forget the holes that need to be drilled (and some filled). Again, the instructions cover these steps well.

All body parts, including both bumpers and door handles, are cast white. For detailing, pick a chrome treatment of your choice for the door handles and mirror faces.

The fender flares are separate parts. You’ll need clear amber for the front marker and turn signals, and clear red for the taillights.

Even though the model is mostly curbside, the chassis is well done. Engine lowers are molded in place, yet there’s a fully detailed front and rear suspension.

Pay attention to the pin directly on the rear springs; they face the rear of the chassis. Rudimentary brake detail is masked by impressive wheels. The fronts are possible.

An accurate interior correctly shows no carpet engraving, as on the 1:1 racer. Door panels feature fine engravings and are a highlight of this kit. Nicely done, Hasegawa!

There’s also a two-piece roll cage and racing seats, but no rear seat (which wouldn’t have been in the car anyway). The instrument panel has a separate piece for the rally panel, and spaces for the gauge decals, rather than engravings.

Dedicate time to clean mold lines and ejector pin marks on the seats.

I was content with the overall fit and finish, and only had a few minor issues. The two body-colored pieces under the grille were troublesome, and small tabs on the side-window trims will need to be removed.

I enjoyed building this little racer and would like to get a hold of the stock version as well!