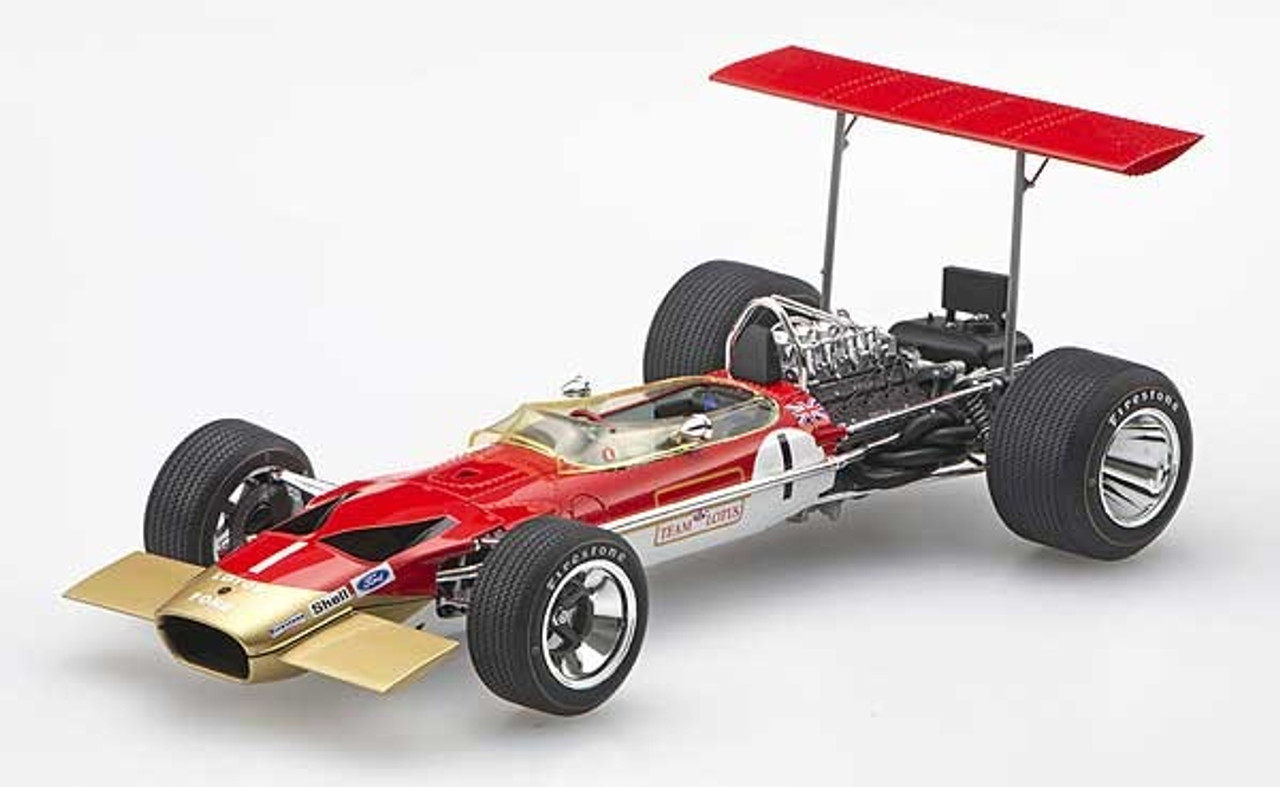 The introduction of the Lotus 49 in 1967 was a revolutionary step in the construction of Formula One race cars. Using a central monocoque and making the engine a stressed part of the chassis made for a lighter, stronger, more adaptable car and is still the norm today.

After a lull in new 1/20 scale F1 kits, we’ve seen a bit of new life from Ebbro out of Japan. Ebbro’s emphasis seems to be on the overlooked “classic” racers.  Sharing much DNA with the old Lotus 49B the new 49B has crisp detail and virtually no flash or mold seams. A beautiful set of tampo-printed tires and a super decal sheet also are new.

Construction is much the same as for the real car, starting with the tub and its inside parts first. Step 1 is deceiving in that the instructions’ picture shows part No. B15 flush to the top of the tub.  A quick check with the outer skin showed that it needs to go all the way down in the slot in order for the lower suspension mount to line up with the access hole.

Seat belts are provided as a decal and could be replaced by an aftermarket set.

The outer panels go on next and practically snap into place. It’s easiest to paint and decal them before attaching them. I chose to paint the lower white portion rather than use the included white decal which isn’t totally opaque.

Next comes the front bulkhead and suspension. Every detail is there; coil- shocks, sway bar, brake, and clutch master cylinders and it all fits together.

Front wheels are poseable but in Step 5, the tie rod should be part No. D15, not No. E17. There is a difference in the upward angle of the end links.

The radiator and coolant piping complete the front end. Unfortunately, most of this is barely visible once the nose is attached. Paint and decal the nose before assembly. Thankfully it’s split where the color demarcation is; paint the top red and the bottom white, no masking required. I tried the decal for the gold on the nose and it worked amazingly.

With most cars of this era, the engine is an important part of the build as it’s hanging out there for all to see. You won’t be disappointed as detail is every bit as good, if not better than, the 1/12 scale Tamiya kit. The cam covers and distributor are set up for spark plug leads. I left the unconvincing molded injector stack covers off.

Aftermarket items here would help too.

The transaxle and rear suspension are built up into their own sub-assembly. In Step 11, parts No. E5 and No. E6 are too short. Use parts No. D13 and D14. The engine was then attached to the chassis. I left the headers off the engine until after attaching the transaxle and rear suspension. The oil tank and cooler, rear sway bar, and gear linkage finish the back of the car.

I chose to build the low-wing car. Its windscreen, which didn’t fit that well, is molded in a transparent yellow didn’t need tinting

The 49B marked the beginning of an era in F1, cars were getting more powerful and faster, started wearing sponsor logos and aerodynamics were becoming vital. It was an important car in the lineage and until now the only models available were Tamiya’s 1/12 kit originally released around 1970, and the equally ancient 1/24 Heller kit. Ebbro has graced us with a top-notch kit that builds into a superb replica!